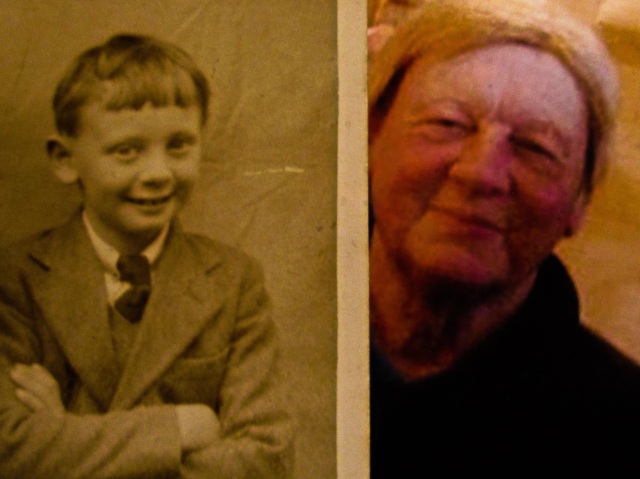 Here comes Johnny Walter, the old geezer on the bike

He is kind and he is funny, and he’s full of Wiltshire wit

He remembers everybody’s name and gets about a bit

For a man of nearly eighty his humour is quite dry

Never underestimate the twinkle in his eye

A Moonraker, a character, an ancient Briton, he

Who reckons that his ancestors lived in Avebury

A child of New Park Street, who heard and smelled and saw

The weary trains of soldiers marching homewards from the war

Who, when he was a teenager, learned how to spin a spool

And hung out at The Palace, and was far too cool for school

Imagine all the movies that he showed throughout the years

How he moved an auditorium to laughter, shock and tears

Fifty years of pictures, all those newsreels and Bond

Folk walking home from Psycho, getting spooked out by the pond

Folk snogging in the back row, swapping hormones, spit and smoke

Johnny hung out with the Mods, and took a scooter trip to France

And liked to watch the ladies, with a beer, at a dance

Until he married Margaret; ‘twas as his father said

“If you take her to the bedroom, you will end up in the bed”

Johnny didn’t mind at all when she with child fell

First came little baby Michael, and then Carolyn as well

And the cottage, out in Cheverell, where flowed a little stream

Until the day that Margaret was taken far too soon

Leaving Johnny on his own, to marvel at the chilly moon

He kept calm, and carried on, ‘cos he’s a solid sort of guy

Kids to bring up, work to do and not much time to cry

But to this day he misses her, puts flowers on her grave

One could call him stoical, or practical, or brave

Yet in his quiet moments, sometimes, silent tears fall

Better to have loved, he thinks, than not have loved at all

Kept calm and carried on, and bore his lot with love and grace

Always greeting friends with a bright smile on his face

He stirred the jam at Easterton, rang all the village bells

He filled the air with music and with sweetened fruity smells

He’s still batty in a belfry, still a jammy sort of cove

You’ll see him with his faithful dog, with whom he likes to rove

You might think he’s a boy racer, in his go fast stripy car

He knows who’s who, and who does what, and where wild flowers are

He is full of Wiltshire wisdom, in a quiet sort of way

You’ll see him thinking carefully about what he should say

When he meets you in the street, and doffs his syrup and his hat

And asks after your family, your garden, and your cat

He has some little sayings, gleaned from years of Wiltshire lore

But doesn’t always understand what certain words are for

He can sometimes drop a clanger, with no malice or intent

And once he even asked me what ‘bisexual’ meant

“We’re all different” he says, “it just don’t do to be the same

Tubs should rest on their own bottoms, for the best chance at the game”

He is a loyal friend to many, and a much belovéd Dad

Just the kindest lovely man that Wiltshire ever had

‘Tis true that good things come in some unusual disguises