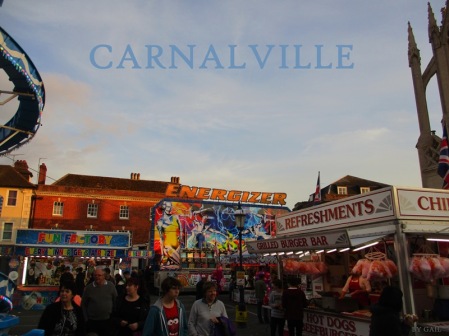 Roger’s libido had increased significantly in his eighties, in inverse proportion to the decrease in his hearing and cognitive ability. The long suffering Betty had tried, despite her arthritis and utter disinterest in such matters, to accommodate his needs; there had been cringeworthy forays in to swinging, unusual items appearing in the shed and furtive gropings on the bus to Swindon.

“Carnival tonight” said Betty, one September in the late afternoon. She was baking buns for church on Sunday, and a warm waft drifted through the house and in to the garden and the Devizes air.

“Carnalville?” said Roger “What goes on there?”

“Oh you know. Dancing girls. Men in dresses. People standing on street corners. Sounds of pumping and banging. Drinking. Over excitement. Unwanted pregnancies. Rubbing up against strangers. The usual.”

Roger liked the sound of Carnalville very much indeed. An appropriate occasion for the Calvin Kleins perhaps. And an extra Viagra.

It was going to be a very interesting night.